Maine Legislature Back in Session

The 128th Maine Legislature resumed its work on January 3, 2016. Senate President Michael Thibodeau (R-Waldo) presided over the opening day of the Second Regular Session of the 128th Legislature. The Legislature is expected to tackle numerous issues such as tax conformity, Medicaid expansion and marijuana legalization, as well as hundreds of bills that were introduced before the session began or are carryovers from the previous legislative session.

The Maine Legislature is scheduled to have its work completed in April. 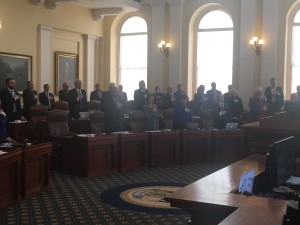